Some cards are easier to interpret compared to others.

The Seven of Cups in the Shadowscapes Tarot deck is one of the easy ones. Or is it?

In the Shadowscapes deck, the Seven of Cups is mostly blue in color. There is also a bit of white and a bit of golden/yellow.

Almost in the middle, we see a couple standing on a cliff. The cliff seems to be trailing off into a far away mountain cliff. This mountain has a castle on it. There is a closer mountain with another castle at its top.

The female figure looks up to the sky, and points to a floating piece of land on which a tree is growing and offers shade to another castle. The male figure is looking into a blueprint scroll of sorts.

At their feet we can see 2 snail shells, pointing to the Fibonacci symbolism. Then, 7 cups of various shapes and sizes, are standing in a curved row, on the ground.

We also see a red ribbon coiled around her waistline. Her belly appears rounded, but motherhood doesn’t seem to be something she is interested in.

The both of them ignore both the castles and the cups, as well as one another, though they stand side by side. 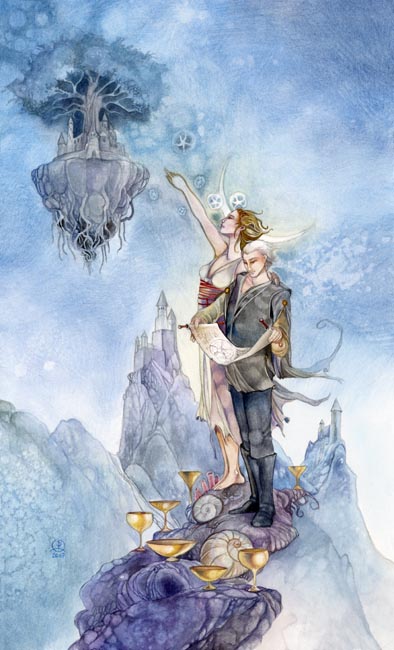 Behind the female’s head we can see a crescent moon with at least 6 stars (that look like the symbols used for the Pentacles suit).

There is another star/pentacle in the blueprint scroll.

This card points to several things:

We already know that the Cups represent emotions, intuition, relationships, mystery, and even religion.

From Christianity (and not only), we know that 7 is a sacred number, as God completed creating the world in 6 days, and rested on the 7th. This aspect seems to be shown in this Shadowscapes card through the 6 stars in the sky and the 7th “resting” in the scroll.

In this context, you have to look back at what you’ve been through and see if or what you learned from all that. This is especially true when something concludes.

To be able to look at what you’ve been through, you need to rest a bit, so that your mind will clear and your emotions to calm down.

If you’re still in the middle of events, you’ll most likely have to do one of the following (or perhaps a combination of actions):

The seventh card is related to the Chariot which says basically the same things as this card.