Welcome to another tarot card interpretation. Or sorts of. This is the Seven of Swords in the Shadowscapes Tarot.

As if the title didn’t already say it. But here I am, repeating myself because … I’m not sure why.

This card is mostly purple with hints of muddy blue and yellow. and white.

My eyes look first at the lightest parts of the card. And this is when i realize that the white part is actually a swan.

The bird is with its back at the viewer, wings spread and looking to the right. I don’t think the swan is trying to take flight. It looks rather startled, or perhaps she just landed.

She stands on a pile of big rocks, surrounded by 6 swords. One of them is barely noticeable. All the swords look more like crosses.

One of them is somehow standing above all the others. Behind it, the muddy/yellowish light can be seen, and forms a spiral (Fibonacci hint).

These swords impaled on a pile of rocks makes me think of the scene of the crucifixion, in the Bible. Also, the swan could also be embracing the light, or somehow praying to the cross. This is not the first time this happens in this deck or suit. (But at the time I’m writing this interpretation, I have yet to interpret other Swords cards).

The swan’s head appear upside-down to me. I could be mistaken. In any case, birds have quite flexible necks. This bird seems not to care at all about what happens around her, just her cross.

There is also a human-like figure. He’s wearing a black mask with a beak and has black wings. He has blonde hair and non-human legs. His legs seem to be more like those of a reptile. 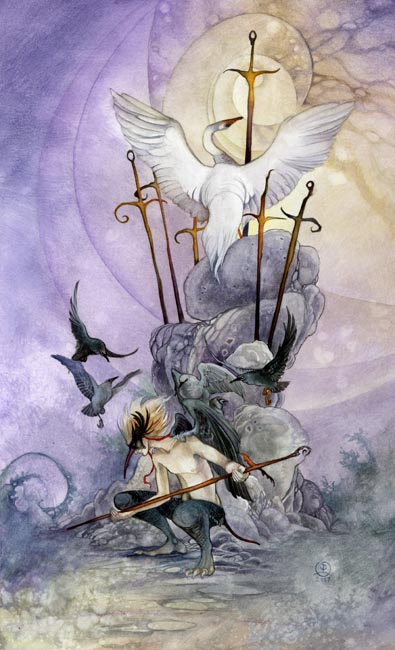 He is holding and inspecting the 7th sword. He appears to have stolen this sword, and tried to make sure he got the correct one. or maybe the sharpest one?

The mask has red ribbons attached. He appears to be smirking.

There are at least 4 other birds, corvids, i believe. Although 1 or 2 of them look(s) more like a pigeon to me. These other birds seem interested in the sword as well.

We can also see a few more swirls or spirals. One of them to the right of the human-like character, the others on the swords.

What can it all point to?

This card seems to make a reference to the Book of Genesis, with the act of creation of the world in 7 days. But also to a later book of the Bible when God gives the commandment to guard the 7th day as holy, setting it apart for the humans, for the first time.

The problem is that here we have 2 swords set aside. This implies duality. The duality is reinforced by the light behind the sword adored by the swan, and the darkness of the character stealing a sword. He is himself dual, as his hair is blonde and yet he has black wings, mask and legs. He is half human and half supernatural being or demon (for all we know).

The trick is that the stolen sword is the separated one. The adored sword has another one by its side. Though we can barely see it.

The mask hides his identity and therefore intentions. We don’t know if he is even able to see through his mask. Could he be blinded by something?

We have to remember that we have a story of Lucifer, the Morning Star, who fell from grace and took with him a third of the angels. In a way, he stole those angels. This card made me think of that story.

The swan was too absorbed in her adoration of the cross to notice the thief. The black birds seem to be happy for his success, though it doesn’t seem like he had to work hard for it.

What can it all mean?

From the Rider-Waite deck, we know this card is about a thief, someone who could be sneaky, is 2-faced. This card perfectly interprets all this.

Because we have the red ribbon in here, we know we should be wary of the thief. Or of our surroundings. Thieves are sneaky after all, and if we’re too absorbed into or distracted by just 1 thing (such as a job), we could miss the point when something or someone dear to us is taken from us. Or departs – such as children leave the house to live their own lives.

Remember that when a duality is present, this means that there’s a lack of a balance or measure.

If you’re going on a trip, make sure to not to take the most valuable items with you. Instead, take items that you won’t mind getting separated from. Of course, the most valuable ones, such as wallet and documents should always be in your possession or on your person.