In today’s tarot card interpretation, we have Four of Pentacles.

Off the bat, there are not many elements to notice, unlike other cards.

The first thing we see is the color. It’s green with hints of yellow and some hints of blue. There is also a bit of purple on the dragon.

Upon closer inspection, we see a branch in the upper left part of the card and a dragon curling on a large coin.

This 4th coin is red and harder to see. I literally was just looking for it for some seconds.

The next elements I notice, are some faerie figures on the branch I mentioned, as well as 2 or 3 chameleons with wings still on the branch. 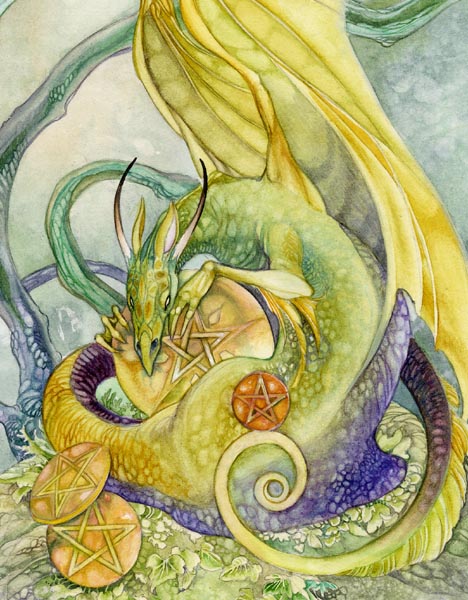 Another element we can easily see, are the spirals in the tails of the dragon and reptiles.

Behind the dragon, some branches appear as more of a bush.

The least noticeable element is in the upper right corner – a few green leaves.

Nowadays, we associate purple with royalty. We associate green with money, and gold with luxury.

Some even see the dragon as a symbol of a ruler. This is mostly seen in East Asia, where the former Chinese emperors used to be called Dragons. Also, the emperor used to be the only person allowed to use items with dragons on them – clothes, chairs, other items.

This association ties well with the Major Arcana, where the Emperor’s card is the 4th.

When drawing this card, you could be seeing a person who likes to be in control, who opposes changes, and denies being weak or having weaknesses. However, our dragon could become weak from not eating because he’s protecting that coin. For all we know, the dragon is already very hungry and weak.

Someone who is possessive, like the dragon in the picture is with that single coin, is also limited in what he can or is willing to do. His vision might even be biased if this relates to a situation involving family or friends. The person might risk losing more people over a single one, and whether this is worth it or not, is debatable. 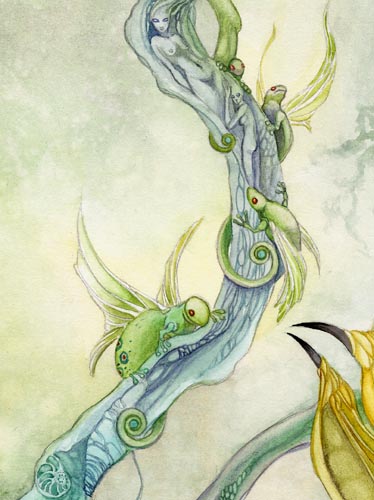 The card might indicate that one should not invest or spend money if the question relates to finances. Those who like to gamble should probably hold back for some time. Or, at the same time, it could also send the message that spending some money now and then is really OK. Of course, the interpretation depends on the person the reading is about (or for).

The dragon appears to protect his possessions from small creatures, that may not even pose a real danger. Being cautious is indeed a good thing, but becoming paranoid about things can be dangerous.

The spirals we see could remind us of life’s cycles. Things come and go, sometimes better and sometimes less good. We all want perfection, but it’s not possible for humans to reach perfection.