If you never heard of Genji Monogatari you’re in for a rather long read… Not here, but in your own research.

I will lend you a helping hand though, as I will talk about it a little bit, before discussing its 1987 anime adaptation.

The Original Story of Genji

Genji Monogatari is known in English as The Tale of Genji, an this is a classic piece of Japanese literature. Its author is Murasaki Shikibu who lived in the 11th century and she was a noblewoman and lady-in-waiting. 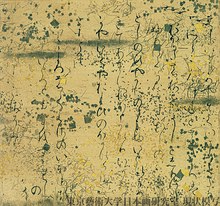 Above you can see a piece of text from this story, from the earliest hand-written scroll that still exists. This scroll is dated to around 12th century, and the image was found on The Tale of Genji Wiki page I linked above.

I personally have yet to read the story, so I can’t tell you much about it without paraphrasing from that page.

In any case, as the title of the work suggests, this story talks about the life of Genji. His full name is Hikaru Genji. However, Hikaru is not a name per-se, but a nickname and it means “Shining.” Genji is his last name, and we don’t know his given name.

The author was talking about one or more real people from her time, but she had to keep their identities as much of a secret as possible. Therefore, she used nicknames and only a family name.

It’s important to know that throughout the story, he’s sometimes called Rokujō no In, and at times just In. This is probably a title of sorts (I am not sure, so I assume).

How about the anime movie?

I don’t want to spoil the anime too much. I watched it because Youtube recommended it to me.

The art is so old, you can tell it’s from the 80s. You’ll most likely get confused because Genji is portrayed with long hair, wearing lipstick, wearing earrings, and looks a lot like a woman would.

In the original story, they say he’s a very good looking man, but if you were to see a Japanese from the time period in which the real Genji lived, they surely wouldn’t look like in this anime. Especially not the men.

This anime movie focuses on the time Genji was very infatuated with his father’s young and beautiful wife. Genji’s father was the emperor of Japan and Genji’s mother, a concubine, i think, died when he was just 3 years old.

It appears that at first, she accepted his attentions, but then later on she refuses him. This leads him to impose/force himself on her – or this is what i understood from what i’ve seen.

Even if Genji is very much obsessed with his young step-mother, he also visits other women who cannot resist his charms, despite him even being married. –I wish you saw me rolling my eyes at him. I’m sure he wasn’t all that, and some were interested in him purely because of his closeness to the emperor. but i go off-topic here.

We also see Genji losing several of the women he’s interested in. Most of them die around early April, when the cherry trees are in bloom. He seems to see the cherry blossom as some sort of a demon. He does suffer a lot seeing all those women leaving him one way or another.

What did I think?

Rating: 3 stars out of 5. I dropped stars because of the fragmented action. Since I didn’t read the story, i don’t know how close to it this adaptation is.

(c)Charly Cross 2020. All rights reserved. The images belong to their respective creators, i shared them for educational purposes.