DISCLAIMER: Bear in mind that some of the links in this post are affiliate links and if you go through them to make a purchase I will earn a commission. I used these affiliate links to give you the option to check the book out, for yourself, if you so wish, through a well-trusted seller. While I will be very glad if you buy any of the linked items, the decision to do so or not, belongs to you. Thank you for reading!

I don’t really know what a “coffee table book” is, but i think this one counts as that. I don’t have an actual coffee table and i don’t have a proper book shelf either. Most of my books are resting on the wide window sill. I have at least 2 windows I don’t use because it’s not practical, one in each room.

I mentioned this book briefly on my blog, in the My Crafting Book Collection post. 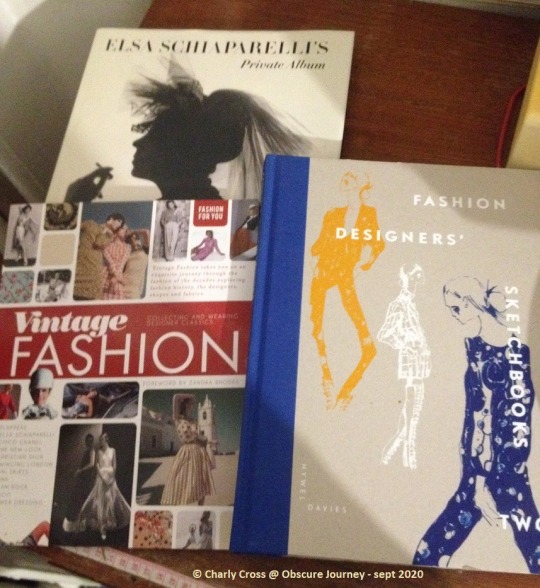 I learned about Elsa from the book in the lower left corner in the picture above. I became intrigued by her creations, because they were wild for back then. Then I saw the Private Album, and I got it, to learn more about her. And if you don’t know who Elsa Schiaparelli is, she’s the Sweater Girl.

PS: All these books were found in a discount book store, but you can also find them online:

So, the Private Album talks about Elsa’s life since she was a child. It presents various and important points in her life. What stuck with me was how her mother was complaining about Elsa’s appearance and how hard Elsa worked to get where she got, and in the end she became almost a nobody (since people didn’t know who she was anymore. but this will happen to us all.) 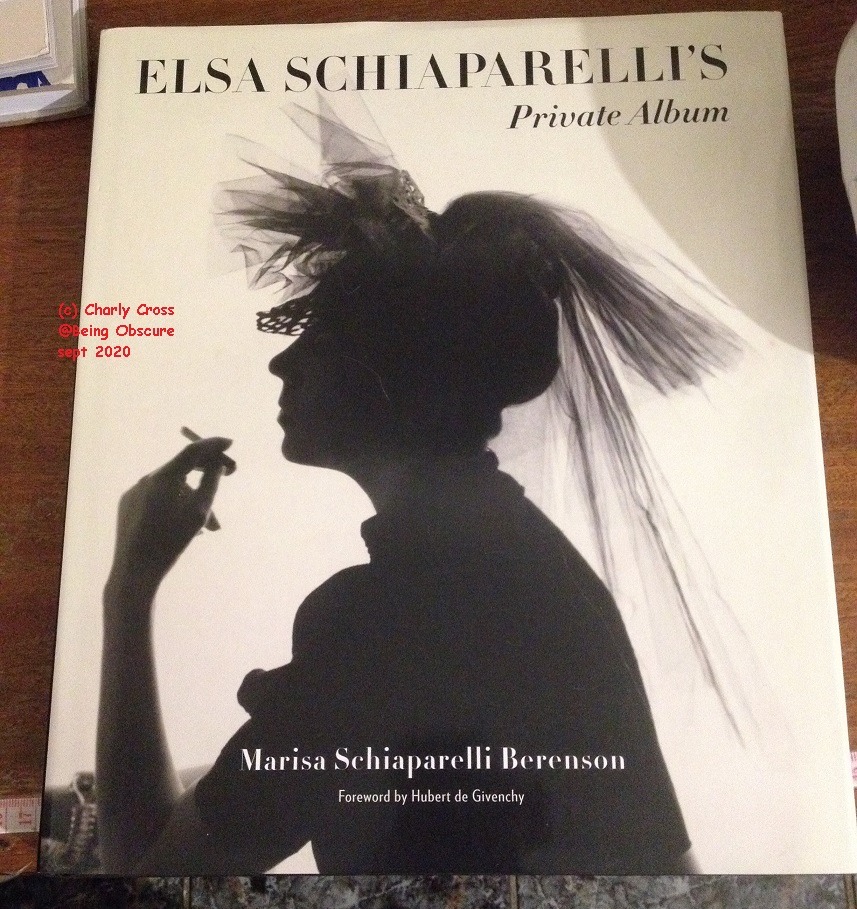 The fact that her mother would complain about Elsa’s appearance is rather disturbing and sad. But I think that for centuries, people didn’t really know how to connect with their children, how to encourage them, and so on. People in general didn’t have good parenting skills. These developed rather late, in the last 40-30 years or so.

Even if the kids had nannies and others to raise them, those doing the raising, were not very knowledgeable and patient. Kids used to receive harsh body punishments. So, having all these historical aspects in mind, we can understand why Elsa’s mom treated Elsa that way.

Elsa seems to also have had a rebellious personality. She married a man she barely met and the wedding ceremony guests/witnesses were folks from the street. Anything but conventional. After Elsa gave birth to her only daughter, Gogo, and things went south for the couple, he left Elsa and the baby. Schiap (she preferred being called this) had to work hard to give her daughter the best education possible. 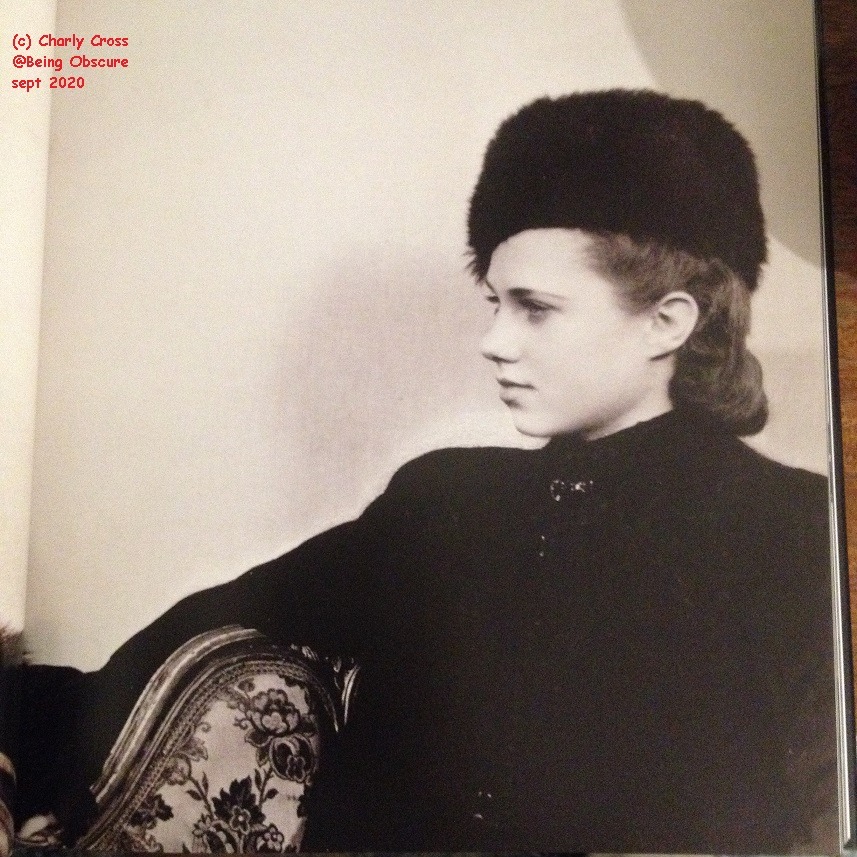 This image above is my favorite in the book and belongs to whoever took it. This is not Elsa, but her daughter Gogo. In the original picture, Schiap is on the other side of the sofa, and the 2 women look one at the other.

Gogo has such an eerie appearance, almost like an illusion. Elsa looks very real, down to earth – and of course there is beauty there as well. Just that my eyes were glued on Gogo for some reason.

The photo album also includes a very disturbing picture that i’ll share below. Maybe the photo itself is not disturbing, but whatever was happening at the time. there’s a caption on the image that better describe everything.

The image is safe for work and it was taken during a masked/costume party … and this is all i can say about the image itself. The parties Schiap attended were quite popular and spoken about afterwards. 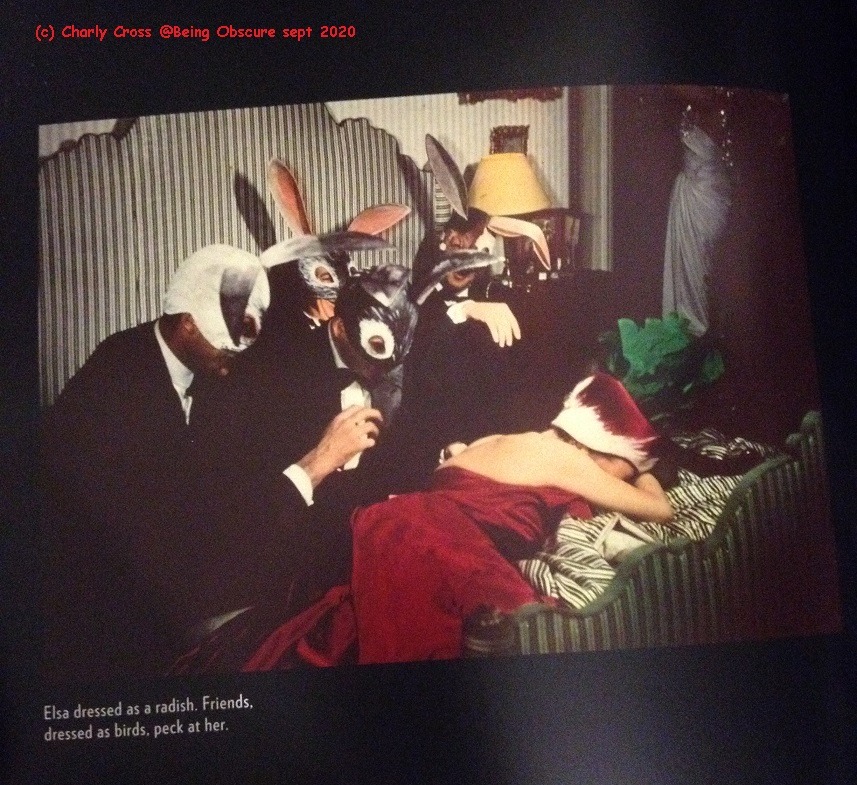 All i can say is that the costumes these days are not as interesting and original as they used to be. And over here, such parties are not even popular, unfortunately.

I think that birds would be more interested in a tomato rather than a radish, but since i’m not a bird, i can’t be sure.

Rating: 4 stars out of 5. Overall, i really enjoyed this book, and I hope you’ll give it a try especially if you like fashion or fashion history.