This is another book review. YAY!

Sleeping Beauties is written by Stephen King together with his son, Owen King. It’s been a while since i read this book, but i haven’t forgotten everything.

The first thing i’ll disclose about this book is that this is not a horror story, and i didn’t even find it much of a thriller either.

It is more of a tense story and quite the page-turner, as you (me, actually) want to know what’s going to happen next and how will the issues be solved.

I’ll start with the spoilers right after the picture below. You’ll want to scroll to the bottom for the rating and recommendation part. – I’m trying to be consistent with the format of the presentation.

If you know the story of Sleeping Beauty, you pretty much understand what this book is all about. I actually like the chosen title. I like these puns, references, and hidden messages, in general. 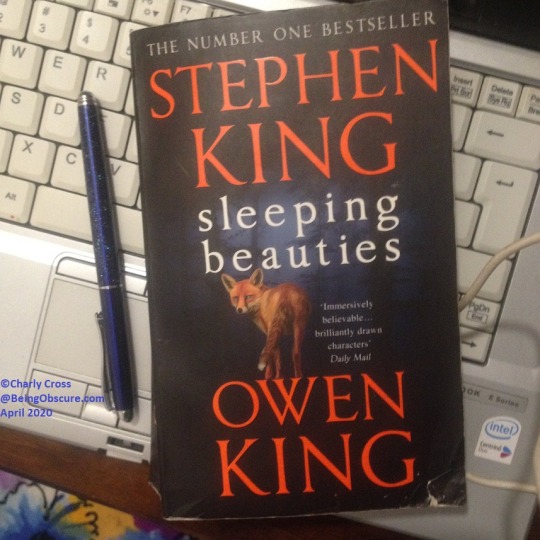 In the beginning,everything appears to be rather normal, until a butt naked woman kills a drug dealer using her bare hands.

Of course, things don’t end there as there are news reports of strange happenings in Australia. According to the news, women who fell asleep grew something white around their heads and wouldn’t wake up. It doesn’t end there, as those who try to remove the white stuff and wake the women up get attacked and killed.

Whatever this is, spreads quickly around the world as women prepare to go to bed. Some are of course taking a nap in the afternoon, others go to bed in the evening, or in the morning, whenever they reach home from work.

This book has many characters, some of them are being female inmates, and the others are various citizens in the town next to the prison. We have people of both genders, of all ages, both black and white.

Since news travels fast, some women realize it’s not a good idea to fall asleep and using coffee or even illegal drugs try to keep themselves awake for as long as possible. To be honest, i have no idea how they do it, as personally, i need my sleep. i need to sleep at least 8 hours per night.

As you could expect, everything is bound to go from bad to worse, as some of the men kill their asleep partners, and sometimes themselves as well. When a asleep woman dies, she disintegrates into moths.

In the town with the prison, the men looking for asleep women to kill, even manage to get employed by the police, as the female officers fall asleep one by one, and the station is understaffed. One should understand that there is chaos since doctors can’t really help women not to fall asleep.

Half-way through the book, we learn that the women of the town “wake up” in a derelict town that looks just like the one in which they were living. They manage to survive in this new world they call OUR PLACE. (I hope i remember it correctly. Thinking about the name right now, it sounds kind of wrong…).

As you can suspect, this is a dream world and they co-conscious there, in a way. They don’t know how they end up there, but in time they manage to figure it out as more women from the town fall asleep and “wake up” in the same place. Only the women from the town get there as far as we – and the characters – can tell.

Some of them experience severe motion sickness despite them not moving. But remember they’re asleep, an this means someone else is moving their asleep bodies around. Some women just happen to disappear out of the blue, leaving behind some moths that fly away into the sky. These are the women who sadly get murdered 😦

What we need to know is that time flies differently in this dream world, as we are all aware. The whole story spans not more than 2 weeks if i remember correctly. In the dreamworld, years pass by. 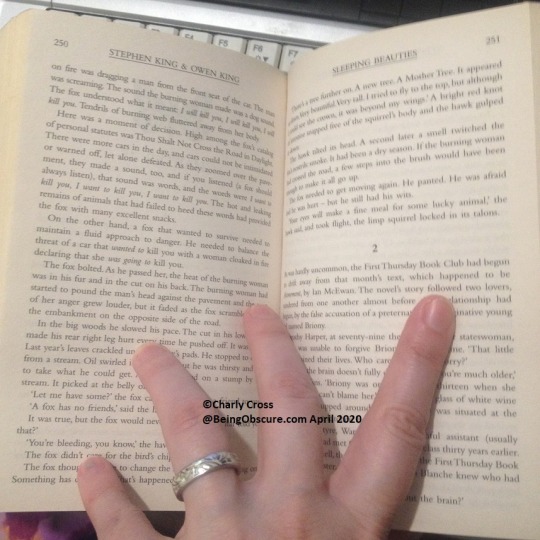 If you manage to read a bit from these pages, you’ll also notice that some animals talk… Well, not to humans, but to other animals. And only some. There aren’t many animals presented in this story, as far as i can remember, but the fox on the cover is pretty relevant in the grand scheme of things.

As you progress reading, you’ll also find out why the naked woman at the beginning is important. But if I told you here why that is, you may not want to read the book anymore. And this book is OK to read 😉

Let’s fast forward a bit and reveal that the characters manage to overcome whatever is making (ALL) the women fall asleep 😉 😉 And everything ends pretty well. It’s mostly the men who have learned a lesson – more or less.

This book receives 3.5 foxes out of 5 foxes.

Mainly because the whole story kinda made me want to learn what happened/happens – GOOD! But then i reached the end, and i felt it was a bit deflated. I felt a bit left down.

Do I Recommend the Book?

If you like Stephen King and you didn’t read this book, what are you waiting for?

If you like weird magic, or weird magical beings, give this book a try. There are more such beings in the story. Not to mention the timeline is a bit weird as well.

There is at least one part that still puzzles me, and I can’t comprehend it. It literally makes no sense. Oh, and related to it, something that happened to one of the asleep women.