This site was getting dry, as i didn’t post a proper movie review in quite some time. It’s not like I don’t have things to review, i just lack the inspiration to do so. Most of the things waiting for me to present them are stuff I have to think more about.

Here comes the new movie from Netflix, Feel the Beat, to the rescue! It was per chance that i found this movie, and i’m glad i did. Also, if you want to allow your kids (if you have them) to watch a movie, i think this was marked as for those over the age of 7 or 8. Growing up (not coming of age) is one of the themes of this Feel the Beat movie. 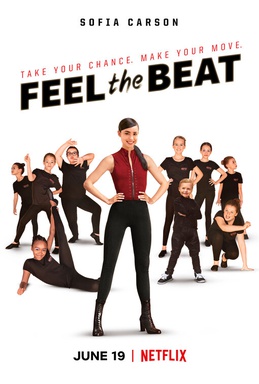 Let’s spoil the show a bit, shall we?

Sofia Carson plays April, a chorus dancer on Broadway. She wants to land a major role in a production for which she auditions. Her career is over right then and there when one of the judges -someone very influential in the industry, sees her on stage. The grudge is because of a …... 😉 -shoot, i forgot, you’ll have to watch the movie now. ;p

April is forced to go back to her hometown after she’s locked out of her apartment because she failed to pay her rent. There she happens to get recruited (against her will) as a dance teacher to a group of little girls who probably would have been better with any other hobby than dancing.

She starts preparing them for a dancing competition as she wants a chance of dancing in front of a producer who is known for hiring whoever he wants, as long as the person is talented.

Of course, the road is not without its obstacles. But it has a happy ending.

There are a few things I liked about this movie. Here they are:

This is the official trailer:

I have a short list of things i didn’t like. Let’s just say that these were aspects that could have been done a bit better.

I think you should go (on Netflix) and watch it, especially if you have nothing better to do and you’re getting bored.