You probably noticed already I have nothing against watching movies that are not spoken in English – I oftentimes like them more. They present the life of the people in a very unique way, and possibly they stay quite true to the life of the common people [of the represented country].

I had to search to learn where was this movie made – in Israel, in a Bedouin remote village.  The spoken language is Arabic, the shown community is Muslim, and the credits are both in Arabic and Hebrew. Most likely this movie is not everyone’s cup of tea, but you should know it did win a few awards and it was pretty close to being nominated for the 89th Academy Awards [2016 Oscars].

On with my review! and the spoilers, marked as usual. 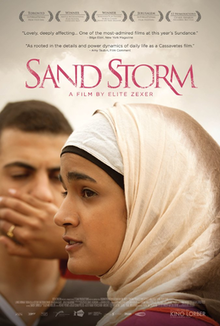 The family has 4 daughters, no sons, and all of them attend school, despite the fact that the eldest daughter [Layla] is of marrying age. We also see a scene in which the men in the village question why is she allowed to study, instead of being married. At this point, we can understand the father really loves his daughters, and as a result lets them do whatever they want, despite their mother disapproving.

The parents don’t have the best relationship, but both love their children and show their love in different ways. When a 2nd wife is brought home, the differences between the parents become even more obvious. The 2nd wife even got a better looking and more modern house as well. Her house is bright, has a big modern fridge that is also filled with food.

The mother discovers her eldest talks to a boy at school and this is the point when the tensions also intensify. While there is a moment when Layla considers eloping with the guy she likes. In the end, she reconsiders her actions and chooses her family instead.

The movie ends with Layla marrying a guy her father chose, despite both she and her mother opposed it at some point.

I still have some thoughts on this movie, and I’m not sure I had things I liked or disliked about it. This was more of a slice of life movie, one that is meant to make you think about some stuff.

One of the things you can think about is: what matters more? The family you’re born into or your love interest?  Clearly, there is no easy and universally true answer here – it all depends on the environment, but many people will treasure the family they’re born into more than a lover or partner.

We also see that growing up is not easy, especially in places where old traditions are still deeply rooted in people’s minds. Having to choose between your parents and your spouse is probably one of the most difficult decisions you could be faced with.

Whatever the choice might be, a person can still be happy – in fact, many people manage to be happier if they make a conscious choice about something, versus going with the flow. [Though there are folks who are happier when they go with the flow instead of stressing over things.]

The plot of the movie seems to be missing, but if you consider that here we actually see Layla and her journey to mental maturity, we can easily see a plot. Mental maturity sometimes means that we have to compromise if we want a peaceful life – and this is not always the most horrible thing we can possibly do.

Rating: I’ll rate this movie 3.5 stars, if not almost 4 stars. I think older teens can also watch it and possibly learn something as well. Prepare a cup of hot cocoa or tea, a blanket, and possibly some tissues – I didn’t cry, but this is not the most cheerful movie either.