Do you know I like to watch horror movies? at least I used to. The last one I saw was The House of the Disappeared, a South Korean mystery thriller, released earlier this year. The main actress is Kim Yun-jin who you might have seen in the TV series Lost.

Apparently, the original title translates to House Above Time, and I personally think it would have been a better choice as an English title as well. Both translations give indications to what the movie is about, though the original tells exactly why things happened.

I guess I spoiled you enough, so see you next time!

Just kidding! The real spoilers [in italics] are about to begin, so read on at your own risk.

For starters, the story appears confusing, at least until you realize some of the scenes take place in the present [when Kim Yun-jin is old] and in the past [when she’s young]. There is a gap of 25 years between the two timelines.

The basis of the story is that what happened cannot be changed, because history was written and the ink has dried. We see this theme in movies like Harry Potter when Hermione is given a time travel device, as well as in the popular TV show Game of Thrones – for those who didn’t read the books. Surely, this idea must have bee 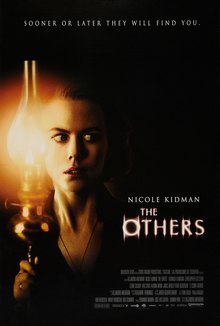 n at least tackled in other shows and books, but I don’t remember them all.

In a way, this movie reminded me of the movie The Others starring Nicole Kidman. I suspect this was the inspiration for this Korean movie, given the very similar posters they have, see the image to the right of the screen.

The Korean movie seems more tragic in a way, because not one family was  ‘haunting’ the house, but two as it is revealed towards the end.  These families weren’t even dead, but they were trapped in a parallel universe where time didn’t exist. All the puzzle pieces fall into place at the end, everything making sense for our main character and for us.

What I liked in this movie:

The themes of time travel, parallel universes, and that it was less scary than I expected. Though being trapped between 2 worlds can’t be too pleasant.

I actually disliked the main character because she acted very muggle-like. I borrowed the term from Harry Potter and I gave it the meaning of someone who doesn’t (nor wants to) understand supernatural happenings.

I should mention that many mothers would have probably acted the same way she did, because she thought it was the right and best thing to do for her child. What’s more, who knows what would have happened if she didn’t decide to act the same.

I give this movie 4.5 stars because it is a really good one, kept me on my toes, and made me think of things. It wasn’t the best movie ever, and I think a cup of tea would have made it better. Go see it if you like supernatural and mysterious movies, with a bit of a scare factor.

Buy me a coffee if you liked this post

This is a 1-time thing. You show your appreciation for my work, and i will deeply thank you. I will continue to post entries like this, regardless of your donation. Times are hard for everyone lately, so DO NOT make donations if your budget is tight, no matter how little the amount is. You can recommend my site to a friend instead – you know, word of mouth kind of thing 😉 Thank you for reading all this! Have an awesome day!