You probably know of Bollywood, India’s movie industry. Guys! Typewriter is an Indian show, made for Netflix and if you like ghosts, I URGE you right now to go watch it. Marathon style!

I don’t want to spoil you too much, so i’ll try not to while talking about it. However, this webserie is really good, perfect to watch before or around Halloween, since there are ghosts involved.

What can I say is that the spoilers are below the image and I’ll try not to be too detailed, but I have to talk about it. I repeat myself because I finished watching it last night and I liked every second of the show. 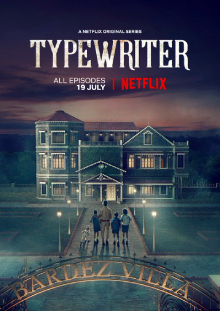 The show starts with what happened some years before the real setting of the show, in present day. Perhaps some 20 years before. I nearly peed myself seeing what happened, but one of the characters, involved in the action mostly indirectly, dies because of the event in the past.

We don’t know what happens in these years, but we see a family driving towards their new home in some Indian village.

This looks and sounds just like any other horror movie with ghosts. And this is fine, because who doesn’t like a big old and haunted house in a horror movie? or show, for that matter? Bring it on!

As the family tries to settle in, one of the moving guys sneaks into the attic and retrieves a box. Apparently, he’s supposed to get rid of the box and its contents, but the eldest child, a girl, sees and wants to keep it because it’s a really cool looking typewriter.

The father sides with her, and so the gruesome events are announced by the ominous music.

We are also introduced to a group of middle school kids skipping school, who prove to be the main characters of the show. These kids are fascinated by ghosts and their goal is to find or at least see one.

The group’s leader is Sam, a girl who lost her mother. It is revealed that she doesn’t only want to see a ghost, but talk to one. She hopes the ghost can bring her mother’s spirit to her, as she misses her mother dearly.

Sam is fascinated by a book called “The Ghost of Sultanpore” written by Jenny’s grandfather, a well-known author. Jenny is the mother in the family that just moved in the only haunted house in town – Jenny’s childhood home.

Things happen, secrets are revealed and through it all, the typewriter sits nicely on the desk in the office used by Jenny’s grandfather. It is also casually used in the middle of the night by the ghost to type – but we almost never see what it types. The typing is loud enough though, that it can be heard from across the mansion (or villa), through several closed doors – pretty impressive. but otherwise, the scary stuff wouldn’t happen.

At the end of the show, everyone thinks they got rid of the ghost. But in good ghost stories, this doesn’t happen. And i’ll leave it at that. 😉

Since kids are involved, you probably think it’s not such a scary show. And you’re pretty right about that. However, there are gore scenes and violent ones. Some of them happen in front of kids, yet they don’t seem to be really affected by the events.

While watching, i felt like on a roller-coaster, mostly because i wanted to see what happens next, especially at the end of each episode. We didn’t watch all the episodes at once, but if you have the power and time, be my guest. I’m pretty sure you won’t regret it.

The ending makes me think there will be a second season – plenty of space left for that. However, there was at least 1 loose end left that I still wonder about.

The action takes place in the Indian state of Goa, in the city called Bardez. From the wiki page on this state, we learn the area used to be part of the Portuguese Empire. This clarified for me why some of their names sounded Spanish – well, they weren’t Spanish but I didn’t know until I started writing this review.

RATING: 4.5 stars out of 5, because it lacked a little in the scary department. The actors were good, and there was a decent towards generous amount of mystery to make you wonder “what’s going on?”

Do I recommend it? I already did 😉

I would probably change the series’s name to “The Ghost of Sultanpore”, as Typewriter seems to give it away in some way.